It is been fifteen days since Dani Sánchez Aranda beat the World Record in barefoot treadmill running. All of the support team still feel very close to Dani because of the great and emotional ending.

The whole group was formed by Dietitians & Nutritionists: Jordi Sarola, Albert Martinez and Sonia Gonzalez. We stablished from the beginning a tailored diet plan. The aim was to meet Dani’s nutritional needs throughout the challenge to avoid any possibility of dehydration or nutritional deficiency.

After this great experience, we are analyzing all the data collected during the challenge. We are focusing on changes in body composition analyzed by multi-frequency bioimpedance and ISAK anthropometric analysis. The other data is about the type of food that Dani consumed such as supplements in liquid, solid or semi-solid form during the 24 hours. 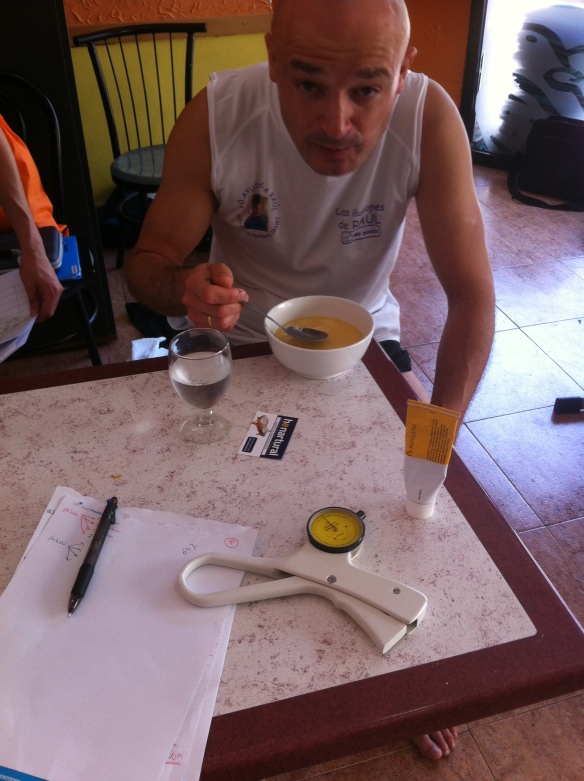 Dani faced this challenge with apparent ease and maintained a steady pace throughout the challenge, but we can say that Dani was involved in many hours of training, effort and dedication as well as having a great capacity for physical mental control. The planning of the dietary strategy and the pre-ergonutritional strategy for the challenge was the key for the World Record. It was the strategy implemented during the challenge and control by weighing food and fluids per hour which allowed Dani to feel 100% throughout the whole race and this was the key to his success.

In this post, we will explain how we introduced our proposed dietary and nutritional planning; what was the food intake and hydration really was in situ; and how all of this influenced Dani’s body composition at the end.

From the beginning we established a pattern of carbohydrate loading based on the changing weight of the athlete so that he received 9 grams per kilogames per body weight per day. Dani received ​​this loading during the three days before the challenge without any difficulty and thus raised the amount of muscle glycogen as an available fuel.

The food prior to the challenge was also rich in carbohydrates, and we recommended performing a pre-hydration regimen about an hour before he started.

Importantly, although we had an initial theoretical dietary plan we changed it if Dani didn’t eat or drink  something we gave him. We adjusted the supply of nutrients depending on Dani’s evolution, his preferences at any time and his assimilative capacity or digestive tolerance. For that reason, we conducted a thorough assessment of everything that Dani ate and drank every hour, taking exact measurements of the quantities administered.

Dani enjoyed fresh fruit like watermelon, apple, melon and bananas; he also ate jelly beans, sport gels with caffeine (50mg/gel), muffins or bread with ham, nuts (especially walnuts), dried fruit (dates and apricots); natural energy bars (Heronymous), and liquid yoghurt. At lunch and dinner we opted for a little more substantial food such as a bowl of noodles with egg white and noodles with rice and egg white.

The hydration regimen was good throughout the entire challenge. Dani had two different drink bottles. We replaced these steadily. For one of them we selected a rich powder, based on carbohydrates with an orange flavor; the other was a hydro-electrolytic beverage. We were weighing and mixing the carbohydrate beberage constantly. We selected a hypertonic beverage and an isotonic drink, which helped ensure the contribution of sodium, and different drink flavors to avoid boredom.

We used cool water (18°C) for all the drink bottles and we discarded the overheated bottles. The temperature of the room was fresh throughout the 24 hours (21°C to 22°C on average) and this temperature helped to optimize the athlete’s thermoregulation.

The changes in body composition that he experiencied during the 24 hours were within acceptable ranges. We performed several tests throughout the challenge including bioimpedance multi-frequency, skinfold and weight tests. These measurements were a great help to know what foods and liquids were needed to ensure a good state at the cellular level, thus preventing imbalances of intracellular water (ICW) and extracellular water (ECW).

We hope to share more information with you about this unforgettable experience, in September .

The e-mail address to contact the team of Dietitians and Nutritionists who worked on the 24-hour Barefoot Treadmill World Record with  Dani  in Canet de Mar (Barcelona), Spain are: